Using a power inverter in your vehicle gives you a lot of different opportunities. With such a system, you can use a lot of various appliances without leaving a car. However, the inverter has not only positive aspects.

The problem of an inverter draining a car battery is not new and quite complex. Drivers know that the inverter won’t drain a battery when the car engine is running, and especially not when it’s driving around. Nevertheless, the situation is different when the engine is off but the inverter is running. And believe it or not, but at some point, your vehicle will not start without a jump or a charge.

As you might have guessed, this issue can be solved by stopping using the inverter before it reaches that point. Another option is to use a separate deep cycle battery just for the inverter, or even a generator with a built-in battery charger.

How Does a Car Power Inverter Drain the Battery

Whenever the engine of any vehicle is running, the car power inverter is charging the battery and also supplies power to the electrical system. In this system, the battery is important because alternators work well only when there is enough battery voltage. However, the alternator is the device that is intended to do the heavy part of the work when the car engine is running.

So, the main principle here is that the alternator charges the battery if there is a need for a charge, gives power to the vehicle’s electrical systems, and still has some power left over for such accessories as an inverter. But this is a perfect situation. Let’s discuss what happens when something goes wrong. The most common problem is when the alternator isn’t capable of providing all that power. For instance, the reason is that it’s going bad. In such a case, your electrical system will probably enter into a state of discharge. If you keep driving when the charger is in that condition, sooner or later the battery will eventually discharge to the point where you have no power to run all the electronics in the car. As a result, your engine may even stop running.

Draining the Battery When The Engine Is Off

When the engine is off, the battery supplies power to all the electrical components of the car. Therefore, if you leave headlights on for 10-12 hours, the battery will drain to nothing. More modern and expensive inverters are equipped with a built-in low-battery-voltage shutoff feature. But even this does not make them perfect as they may or may not actually leave you with enough backup power to run the starter motor.

Remember that starters require a lot of amperages to crank, thus running an inverter while you are camping can leave you stranded. It can be a solution to start your engine to charge up the battery from time to time. Another option is to use a generator with a built-in battery charge for the situations when you end up with a dead battery.

Let’s say your battery has a capacity of 100 amp hours, and you are going to charge a tablet that requires 45 watts. In this case, you will be able to get about 11 hours out of your battery: 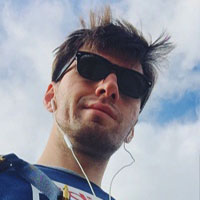