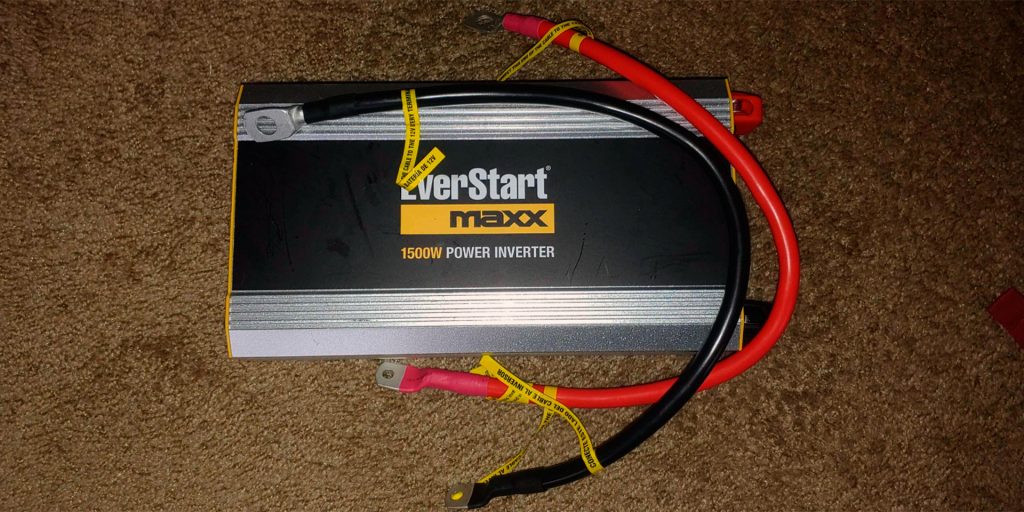 Well, let’s figure out what a power inverter for a car is. The most important thing is to understand that thе power inverter converts 12 volt DC power to household 110-120 volt AC power.

Thus, an inverter can help you out in many situations when you need to use household appliances or charge certain devices while away from home. This is due to the fact that it uses the energy that is generated by the battery of a vehicle, that is, a car, boat or truck. Moreover, it can also be connected to renewable energy sources such as solar panels or windmills.

The buyer should understand that inverters are different not only in composition, but also in place or area of ​​application. Some are more suitable for travel or transportation and some are more concise at home. Based on this, when choosing power inverters, there are 2 types.

First, it is worth highlighting the inverter that is used in cars and trucks. They are more adapted to transportation, and more logically fit into the theme of constant driving. You can place it in the most secluded places and save space. It is often placed in trunks, under seats, etc. The fact is that its main task is to help you freely use devices and devices in the car without interruption.

Second, it is worth highlighting the inverters that are more designed for home conditions. These include inverters, which are designed to work with sensitive equipment. For example, it can be medical devices that should not suffer from voltage surges. In addition, humidifiers, and many other devices also need a stable electrical flow, and for this, they need an inverter.

It’s no secret that they produce clean and planned energy that works well for these appliances.

Speaking of modified sine-wave inverters, it is worth considering that their intermittent wave is more unstable and can negatively affect more fragile and sensitive equipment. Thus, a modified sinusoidal inverter is worth buying for devices that are not too demanding, for example, it is better to place it in a сar.

What size power inverter do I need?

The size of the power inverter is a very important part of choosing a device. In addition, very little needs to be done to make the right choice. Just correctly calculate the amount of energy that each individual device consumes. If you connect more powerful equipment to a low-power inverter, there is a high risk of failure due to operation at maximum loads. Thus, we can formulate a rule of choice: its power must be twice as large as the total power of all simultaneously connected devices.

What will a 300 watt power inverter run?

Don’t worry, even an inverter with only 300 watts of power can easily run a huge array of devices. Here’s a rough list:

What will a 750 watt power inverter run?

Such an inverter can easily power all the household items listed above. In addition, it can easily work with:

What will a 1000 watt power inverter run?

An inverter with a power of more than 1000 watts will be able to run powerful devices without any problems. In addition, it can also feed all of the above. With that in mind, here is a rough list of fixtures for which it will work:

What will a 2000 watt power inverter run?

A 2000 watt inverter can power a wide range of power tools and appliances. It can power the following:

To learn more, check out my article on the best 2000 watt inverters.

What is also worth paying attention to when choosing an inverter?

Continuous and peak power of inverters

A very important part of choosing an inverter is understanding the difference between continuous and peak power output from your device. In addition, it is important to know in order to understand at least an approximate inverter power consumption.

Peak output power is the rate that an inverter delivers over a short time (usually a few seconds) to start up and power devices and tools. In turn, continuous power output is the limit for stable operation. Thus, choosing the right inverter is not difficult: if in total your devices consume 1000 watts, the inverter must support at least 1000 watts, respectively.

The number of connection options also plays a significant role. The more ports there are, the more devices can operate simultaneously from one inverter. Many inverters boast state-of-the-art USB ports and AC outlets. Such implementations help to charge equipment like a phone or a laptop quite easily and simply.

It is better to calculate this moment in advance, because the more ports, the more expensive the inverter, this is obvious. Therefore, most of all it is advised to calculate the approximate number of devices that you want to use and that’s it.

Absolutely any power Inverter buying guide will argue that your own safety should come first. No matter how we twist the inverter, always focus on having an ETL safety certificate. Its intended purpose is to ensure compliance with all North American safety regulations. Thus, you can be sure that the product is protected from overload, short circuit and overheating.

How to install a power inverter?

In this power inverter buyers guide, a section related to correct installation must be inserted. Most mid-range inverters up to 450W come with a cigarette lighter adapter. They can also often be plugged into a cigarette lighter outlet, despite the fact that using 150-200 watts is the maximum you can get out of it.

While installing a power inverter whose power starts from 500 W, it should always be connected directly to the battery of your car. It is also worth considering the fact that you should always use an electrical overload protection device. The best way to deal with this is a circuit breaker.

How to connect two batteries to an inverter?

There are two main ways to connect two batteries together. Usually they represent a connection through a series, and the second is a parallel one.

In addition, you should never cross the remaining open positive and open negative poles. This is a short circuit and could damage the equipment.

Which battery do I need: automotive or deep cycle?

If you are thinking about how to choose a power inverter, it is worth considering its type, which is more suitable for you. For example, 90% of car and marine batteries provide more than adequate power levels, ranging from half an hour to 60 minutes. Yes, this figure is often unreliable because it depends on the age of the battery and on the power consumption.

For inverters that offer an order of magnitude higher power, that is, from 500 watts, it is worth using deep-cycle marine batteries. They are completely free to provide several hundred full charge and discharge cycles.

It is also important that when operating the inverter with a deep battery, you start the engine every 30-60 minutes. He also needs to be given a little time to work, about 10-15 minutes, and this will enable the battery to recharge.

Often the most unforeseen situations happen where there is simply no other choice but to use the inverter. Fortunately, there is one very easy way to use the inverter in an emergency. Provided your car is running, you can connect an inverter to its battery and then run an extension cord to your home where you can then plug in the electrical power and power your household appliances. Therefore, using car batteries to power appliances can be a very good solution in an emergency.

How long will a car battery power an inverter?

To estimate the duration of the battery and your device, you can use a very basic working formula. Let’s say you are using a 12 volt system. The formula will look something like this: 10 x (battery capacity in ampere-hours) / (load power in watts)) / 2 = operating time in hours. If you want to calculate the running time, you just need to replace the first number with “20”.

It is also worth understanding that deep cycle marine batteries have more reserves and, moreover, can experience much more reloads and overloads.

Before work, you always need to check the amount of charge, since the batteries for starting the engine should not be discharged below 90% of the charge. In the same situation, deep cycle marine batteries should not be more than 50% discharged. If you do not pay enough attention to this factor, be prepared to ruin your battery or significantly reduce its lifespan.

Will a car power inverter drain the battery?

This is a very common question among those who own an inverter and among those who plan to purchase it and think about all the uses and minuses. Fortunately, this power inverter buyer’s guide includes information on this for your convenience.

The inverter cannot discharge the battery in any way when the car is running and running. In addition, it will not negatively affect the battery if the car is in motion. However, it is worth considering one subtle but important detail: use the inverter wisely if your engine is turned off, because this quickly depletes the battery, which can simply cause it to discharge.

How much power does an inverter draw with no load?

Leaving aside basic loads, a typical inverter up to 500 watts, no load, typically consumes 0.1-0.2 A per hour. Larger and more powerful models consume up to 2.0 A per hour. For example, if you leave the inverter on for 24 hours in standby mode and absolutely not load it at all, then on average, the battery will be discharged by about 1-2 Amperes over an hour. Nevertheless, all indicators may vary depending on the manufacturer, the filling of the inverter and its optimizations.

It often happens that completely unforeseen situations occur with the inverter during operation, which you still need to be able to solve or at least know what happened. They can happen for completely different reasons. If you are sure that this was not due to overloading or overheating of the inverter, and in general it is not your fault, look at the list of problems and their possible solutions to fix the problem. The most common problems include: