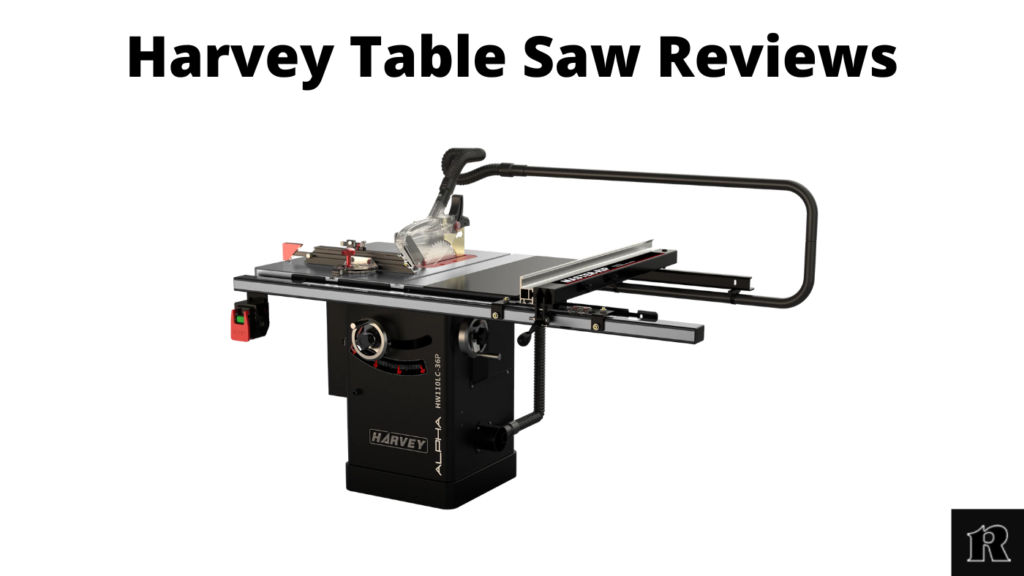 If you are looking for a powerful, durable table saw, I strongly suggest that you check out Harvey table saws. While these contractor saws are on the expensive end, the saw is made from high quality materials and makes very precise cuts. This article will cover Harvey table saw reviews and everything you need to know about the saw.

The Harvey table saw is an excellent saw for carpenters. My favorite features are the miter gauge, the sliding rip fence, and the tin coating.

The two main downsides of Harvey table saws are the overhead dust collector and the heavy weight of the machine.

How much do Harvey table saws cost?

Despite using high end material and a powerful motor, Harvey table saws are reasonably prices. They have saws that have 2,3, and 4 horse power motors, ranging in price from $1,850 to $3,400.

During the holidays, they occasionally have free coupons that get you 5% off.

As mentioned earlier, my favorite features on Harvey table saws are the miter gauge, rip fence, and the tin coating. I will go into more detail on each feature below.

The miter gauge on Harvey saws is top notch. It has a protractor attached which allows you to easily set the angle of your cuts. The thumb screws make it very easy to lock the gauge into place at the desired angle.

I also really like that the miter gauge has an extension which allows you to make angled cuts on longer boards. There is also a built in depth stop which comes in handy.

If you are interested in miter saws, you should check out my review on the best compound miter saw.

I was a bit skeptical when I first saw the functionality of the rip fence. It is attached to the saw by bearing balls which allows the fence to easily slide up and down the saw. I was afraid that dust would get in between the cervices of the slider which could restrict it’s movement, but after hundreds of cuts I have not run into the issue.

The fence slides like warm butter up and down the saw just as easily as it did when I first used the saw. There is also a cool feature that allows you to flip the fence over to a lower height which allows you to cut with a low-profile edge.

Another unique feature that I really like about this saw is the tin coating that covers the top surface of the saw. This coating helps prevent moisture from collecting on the saw, and helps prevent rust from forming.

It is also much smoother than the normal cast iron coating that is on most saws. This leads to less friction on the surface, which makes it easier to push boards through the saw. It also helps prevent saw dust from sticking onto the saw.

Some other features that I like about the Harvey Table saw are:

Blade: The factory blade that comes with the saw is very durable, and still makes sharp, precise cuts after hundreds of uses.

Downsides of the Harvey Table saw

While these aren’t deal breakers, the two biggest downsides of Harvey table saws are the overhead dust collector/blade guard system, and the heavy weight of the machine.

When you remove the blade guard, the overhead dust collector does not have a cap to put over it. This can get in the way because the tube is pointed directly at your body when you are making a cut. You can put duct tape over the tube, but it would be much easier if there was a cap you could use to cover it.

Also, I’ve notice that some types of wood (i.e pressure treated wood) can sometimes have its chips stuck in the dust collector tube.

I don’t want to be too critical of this saw, but it is worth noting that it is extremetly heavy. Now, the reason is because the saw uses high quality, durable metal, but it still makes the saw a bit hard to move around.

Most Harvey table saws weigh over 500 pounds, so you will definitely need a couple hands to move it around.

When it comes to setting up the saw out of the box, it is pretty self-explanatory and the steps are well explained in the manual. If you need help putting together a Harvey table saw, I suggest you check out the video below.

Is the Harvey table saw worth it?

Whether you are a professional carpenter or just a woodworking hobbyist, I definitely recommend Harvey table saws. As this review covered, their saw is made form strong, durable material that is meant to last.

The cuts on the saw are extremely accurate, and while this saw is relatively expensive, I definitely think it’s worth it.